Jaguar Land Rover Classic Works is an all-new facility in the British Midlands dedicated to offering a range of products and services designed to fuel the passion of owners and enthusiasts for classic Jaguar and Land Rover vehicles.

The opening of Classic Works in Coventry is an important milestone in the rapid development of the Jaguar Land Rover Classic brand, which was launched in March 2016. This is the first purpose-built site for Jaguar Land Rover Classic, which brings all sales, servicing and restoration operations under one roof. The brand’s global expansion continues later this summer with the launch of a new facility at Essen in Germany.

Classic Works is hugely important to Jaguar Land Rover. It’s much more than a building – it’s the heart, and soul, of Jaguar Land Rover Classic for our clients worldwide. Being able to support owners and enthusiasts of our two great brands with a full suite of services for classic vehicles is a fantastic opportunity.

At 14,000m2 Jaguar Land Rover Classic Works is the largest facility of its type in the world, with a dedicated showroom space and 54 workshop bays for servicing and restoring all Jaguar and Land Rover models out of production for a decade or more.

The workshop is organised into dedicated strip-down, remanufacturing and assembly zones for the Land Rover Series I, Range Rover Classic and Jaguar E-type Reborn restoration programmes, including an engine shop, and houses the XKSS build line.

Classic Works is also home to the Jaguar Land Rover Classic Collection of more than 500 vehicles, a living assembly of British motoring history, which is an invaluable reference for restorations. Vehicles in the collection are also available for loan to car clubs and museums, and for Jaguar Land Rover and its partners to showcase their heritage at events.

To support the growth of the Classic business, Jaguar Land Rover has invested heavily in traditional manufacturing skills, with numbers of skilled staff employed up by 100% since it was formed. More than 80 specialists are now employed at Classic Works, many with decades of experience working solely on the models catered for at the new facility. By the end of 2017, this number is expected to grow to more than 120 specialists.

The close ties to the core Jaguar Land Rover business mean the Classic operation can also take advantage of cutting-edge manufacturing technology, such as 3D scanning and Computer Aided Design, which allows the re-tooling and reintroduction of parts such as Jaguar E-type and Range Rover Classic panels – parts that would otherwise be prohibitively expensive to remanufacture.

Our people, their knowledge and their skills are the heart of Jaguar Land Rover Classic. There are more than 1.5 million classic Jaguar and Land Rover vehicles in existence worldwide, and we are investing in traditional manufacturing and restoration skills to ensure enthusiasts are able to give cars with a glorious past, a glorious future.

Jaguar Land Rover Classic is the official source of authentic cars, expert services, genuine parts and unforgettable experiences for classic Jaguar and Land Rover enthusiasts worldwide – all of which are now available from Classic Works.

Legends Continued currently sees nine ‘new’ examples of the D-type-derived XKSS being hand-built from scratch to authentic 1957 specifications, creating the cars which were never completed in period due to a fire at Jaguar’s Browns Lane factory. Examples of the ‘Missing Six’ Lightweight E-type continuation models built in 2015 are also maintained here.

Through the Reborn Legends programme, Jaguar Land Rover Classic sources and restores select classic models to authentic specifications, without compromise. Launched in April 2016 for Land Rover Series I models, the two-door Range Rover Classic joined the Reborn programme from February this year, making its debut at Salon-Retromobile in Paris. And, Jaguar E-type Reborn launched at the Techno-Classica Essen show in April, with an initial build programme for 10 Series 1 E-types.

Jaguar Land Rover Classic is now able to offer a restoration service for clients’ own vehicles, across both marques, utilising the same expert knowledge and skills that produce the Legends Continued and Reborn Legends vehicles.

EXPERT SERVICES
Repair and maintenance of all models out of production for 10 years or more is offered at Classic Works, from XK120 to XK8 and Series Land Rovers to Discovery and Freelander models from the 1990s.

The first time any classic Jaguar or Land Rover enters the Classic Works facility it’s offered a comprehensive 121-point visual inspection, resulting in a report detailing any work required. As any work is carried out, it’s recorded in a Jaguar Land Rover Classic Works Service Book.

A dedicated XJ220 servicing zone is operated by experienced Jaguar supercar technicians, some of whom have supported the XJ220 programme since it entered production 25 years ago, using tailor-made service tools for the 212mph supercar.

GENUINE PARTS
Jaguar Land Rover Classic Parts supplies genuine parts for models whose range has been out of production for over a decade. The catalogue currently has more than 30,000 individual and guaranteed parts, available to order from Jaguar Land Rover's global retail network. Specialist technical advisors have extensive product knowledge and selected parts are available to order on the day for collection at local retailers.

The number and range of parts available to support owners of classic Jaguar and Land Rover vehicles will grow significantly with investment supporting the Classic business. Recent additions include Jaguar E-type and Range Rover Classic panels, and brand-new Pirelli P-Zero tyres for the Jaguar XJ220, enabling owners to fully enjoy their supercar at peak performance again. The only Jaguar-approved and J-Rated tyres on the market for the XJ220, the Pirelli tyres were developed in conjunction with members of the car’s original engineering team.

UNFORGETTABLE EXPERIENCES
In addition to cars, services and parts, Jaguar Land Rover Classic also offers clients the opportunity to experience a selection of legendary Jaguar and Land Rover models with Classic Drives at sites including MIRA and Eastnor Castle, where many of the vehicles were developed. And, drives can be combined with factory visits too.

For those with a competitive spirit, the third season of the Jaguar Classic Challenge race series for pre-1966 Jaguars is now underway. The five-round series began at Donington Park in April and continues at Brands Hatch on 1-2 July. Races at Silverstone Classic in July and Oulton Park in August lead up to the season finale at September’s Spa Six-Hours meeting in Belgium.

APPROVED BY LE MANS WINNER ANDY WALLACE
Jaguar Land Rover Classic has appointed 1988 Jaguar Le Mans winner Andy Wallace as Chief Test Driver for its vehicle programmes. Wallace will road test Jaguar Classic-built
Legends cars before they are presented to clients. He will also help with the hand-over of these prized vehicles with expert driving tuition and technology familiarisation demonstrations.

I am delighted to join Jaguar Land Rover, and its team of highly experienced drivers. In my role as Chief Test Driver for Jaguar Land Rover Classic, I will have the great pleasure of putting models like the E-type and XKSS through their paces. It’s an opportunity I couldn’t resist.

During a test drive of the Jaguar XKSS with Norman Dewis, Jaguar Cars’ chief test driver and development engineer from 1952-1985, Andy Wallace added:

I’ve had the pleasure of learning from the master today. Norman showed my colleague Kev Riches and I how it was done by his team in the 1950s and 60s. Although the law now limits the sorts of speeds we can try the cars out at, Norman assured me it is still ‘the best job in the world’. I couldn’t agree more.

TAKE A CLASSIC WORKS TOUR
From September, members of the public will be able to experience the craftsmanship and expertise for themselves at the new Jaguar Land Rover Classic Works.

Expert hosts are on hand to show a selection of vehicles from both marques, ranging from restoration projects including Land Rover, Range Rover and E-type Reborn to rarities like the XJ220 supercar, which celebrates its 25th anniversary as a production car this year. Visitors will also get a close look at the meticulous build process of continuation models such as the XKSS.

Exploring the pioneering craftsmanship in recreating classics and the unique stories behind the sourcing, build process, technical highlights and history of models within Classic Works,
visitors are guaranteed an experience they will not forget. The tour will take approximately three hours and is priced at £49 per person. For further information and to reserve a space today, visit: https://experience.jaguar.com/classic-works-tour
or https://experience.landrover.com/classic-works-tour

NEW JAGUAR XF SPORTBRAKE MEETS ITS ANCESTORS
On the day of its global reveal at Wimbledon by world number one tennis player, Andy Murray, Jaguar’s new XF Sportbrake joined the celebrations at Jaguar Land Rover Classic Works, lining up alongside classic models at the Ryton-on-Dunsmore site. The most dynamic premium estate car in the world, the new XF Sportbrake combines traditional Jaguar design and agility with a spacious and practical interior, and excellent towing ability.

The Trust’s aim is to preserve and educate the public about the heritage of Jaguar Cars Limited and all its predecessor marques including Swallow, SS, Daimler and Lanchester.

The Trust has permanent displays at the Coventry Transport Museum and the British Motor Museum at Gaydon.

All enquiries from prospective Jaguar Land Rover Classic customers should be directed to: info@classic.jaguar.co.uk or info@classic.landrover.co.uk / +44 (0) 203 601 1255 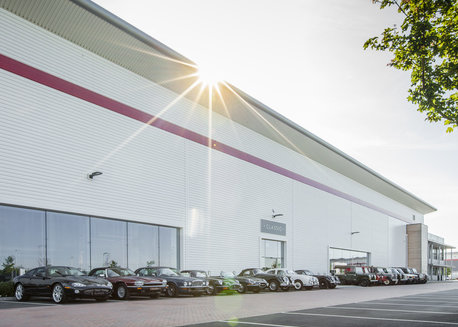 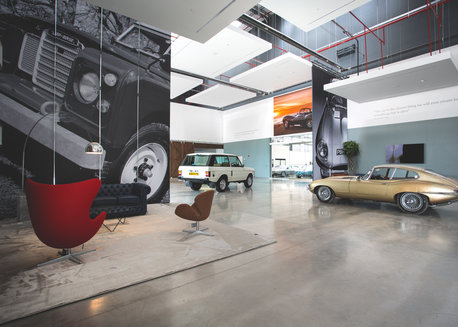 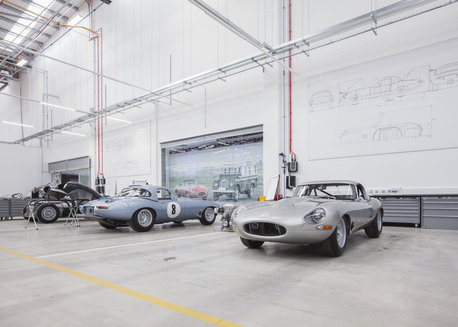 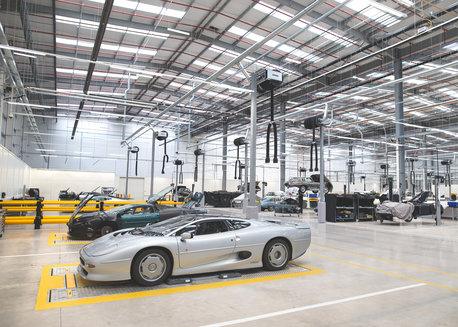 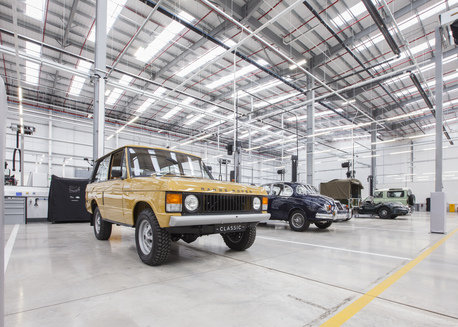 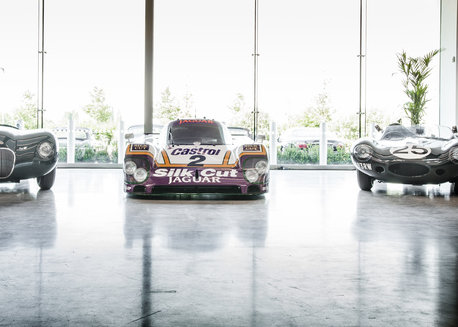 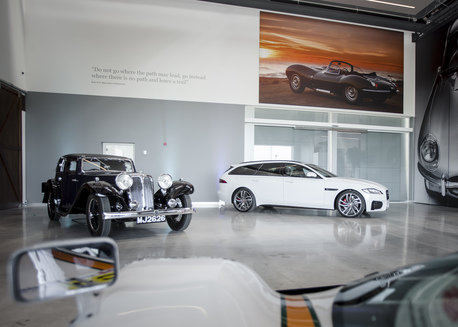 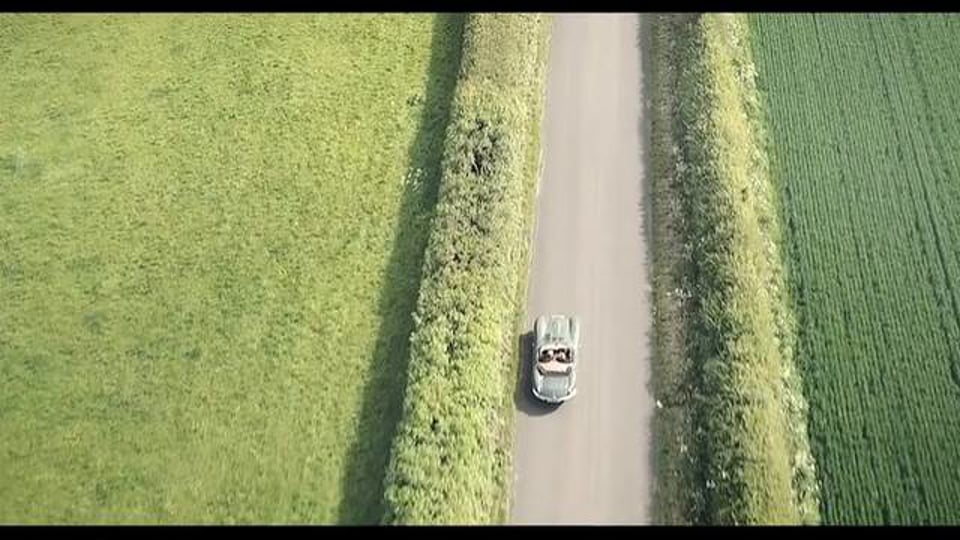 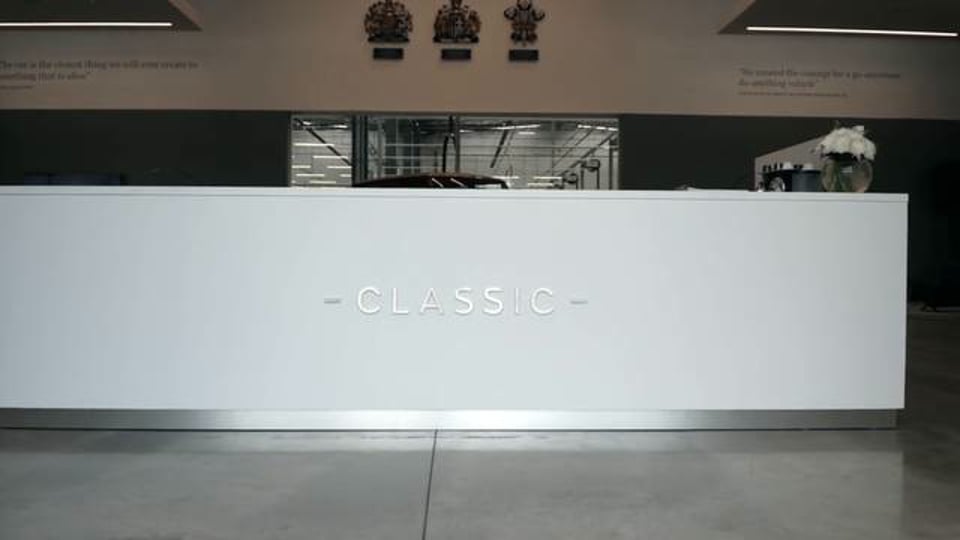