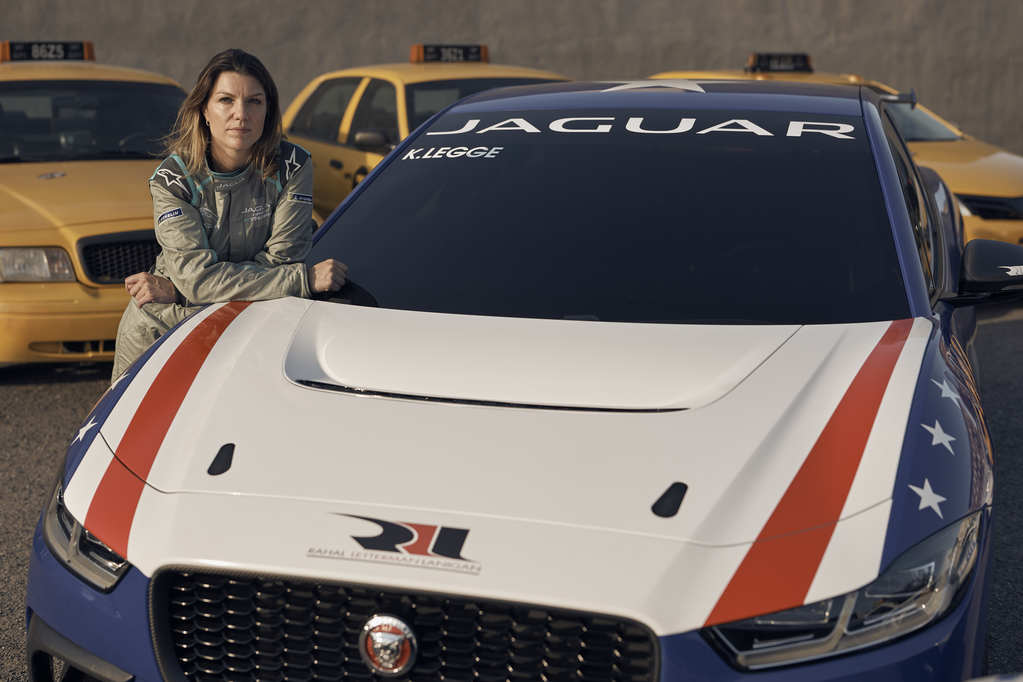 Determination, Versatility and Speed – How Katherine Legge Went from Go Karts to Jaguar

How did you get start in racing?

I started racing go-karts when I was 9-years old. My family went to Spain on vacation and my dad, myself and my uncle had a go on the fun karts there, which I loved. I thought it might be what I wanted to do with my life, I loved it but I had no idea it would be possible to become a race car driver. We didn’t have a lot of money, but I nagged my dad enough to buy me a go-kart and I immediately won races and championships. I’ve been very fortunate. I’ve been very, very lucky and very determined. I worked really hard for it, I tried and tried and never gave up. I’ve been very lucky enough to do what I love over the course of the years.

In 2005 you became one of only a handful of women to test a Formula 1 car. What was that experience like?

You’ve raced extensively in Europe as well as the United States. How is racing different throughout the world?

Basically racing is all manufacturer driven. Manufacturers race to showcase technology and prove that they’re the best of the best. And it’s the same all over the world. The series vary slightly, you have stock cars, open wheel cars, touring cars and GT cars, and that’s pretty much the same throughout the world, it’s just that the teams and the tracks are slightly different and then you have some global series like Formula E that bring it all together.

If young female fans would like to get started in racing what advice would you give them?

Never give up. If it’s your dream and you want to chase it then keep chasing it and just don’t give up. Determination is key basically, as is the work ethic and the will to win. If you’re not 110 percent committed to it, you won’t make it.

You’ve said, “I eat, drink, breathe, sleep, live -- everything -- racing. I mean, I cannot imagine a world without racing in it, without me driving.” Where does this passion for the sport come from?

It comes from doing it. It comes from living it all the time. 24/7. It’s part of me. If you grow up since you’re nine years old doing it, it is you. It’s part of me now. There’s no me without it. In my mind it’s a very integral part of who I am. I can’t imagine my life without racing in it.

How is racing in Formula E different than other open wheel series like Indycar?

It’s obviously different because the cars are powered by batteries and motors as opposed to normal engines, but it’s also different because it brings racing to the people on downtown streets all across the world. It’s a global series, just like Formula 1. It’s the electric version of Formula 1 that brings racing to the people. It also showcases battery technology, and it’s really a thinking man’s sport because you have to be very good at managing energy. The cars also accelerate a little bit differently because there’s 100 percent torque available right away. Apart from that they drive like an open wheel race car on a city street.

How will your Formula E experience help you when you’re racing the Jaguar I-PACE in the eTROPHY series?

I hope that it will make me more versatile, being able to jump into a number of different things and I have a little experience with energy management, but honestly it’s going to be a completely different animal. I think it is so new, no one really knows what the challenges will be. I think it will be a question of who adapts more quickly.

Bobby Rahal is a racing legend and he was instrumental in Danica Patrick’s success. What advice has the Indy 500 champion passed on to you?

Bobby and I have been friends for a long time. I’m just really stoked that I’ll get to drive for him. He’s a legend in our sport. He’s not only a legendary race car driver he’s also a very successful team owner. I’m sure he’ll have some helpful advice. He has a very unique, very experienced outlook and I’ll be happy to hear any advice he will have and I’m sure he’ll have a lot it. I’m looking forward to that.

Outside of racing you’re a STEM Ambassador for Girl Scouts. Please tell us more about that experience.

STEM (Science, Technology, Engineering and Math) is something that’s very close to my heart. At first I had no idea that what I do as a race car driver is STEM related, but everything we do is STEM related, the tracks, the cars themselves, everything. I love that aspect of it, the strategies, the car set up, the engineering, even from my go-kart days, where you put the seat for the weight distribution, what sprocket you use, so many things are STEM related. But there’s a distinct lack of new engineering students because they don’t see STEM as sexy, but I’m trying to get more young people, women especially, involved in STEM because I think it is a really cool thing to do. Whether they want to be race car drivers or engineers or whatever aspect of it they want to be I’m a big proponent of that.