Jaguar Land Rover continues to lead the automotive industry in the development of advanced lightweight technologies. The new 300,000m² factory will be at the forefront of aluminium manufacturing and engineering expertise in Slovakia. It will manufacture a range of all-new aluminium Jaguar Land Rover vehicles, supporting the company’s on-going commitment to deliver high-tech lightweight cars to its customers.

The start of construction in Slovakia today represents the beginning of a new phase in our plan to create a truly global business. The factory will strengthen our international manufacturing capabilities as well as complement our existing facilities in the UK, China, India and Brazil.

The £1 billion plant will have an annual capacity of 150,000 vehicles and the first cars are expected to come off the production line in late 2018. It incorporates cutting-edge current manufacturing technologies and it is the first in Europe to use Kuka’s Pulse carrier system which is 30% faster than conventional conveyance systems. It will also feature a highly automated paint shop process to ensure the highest quality and to minimise the environmental impact. Looking to the future, the factory has been designed with the flexibility to enable smart, connected manufacturing technologies which will support improved process efficiency, delivery and quality.

The plant will include a range of environmental measures, such as water saving devices and heat recovery systems, to ensure sustainable and efficient operations.

Since Jaguar Land Rover confirmed its plans in Slovakia, more than 40,000 people have registered their interest in working at the new plant. When fully operational, the plant will employ 2,800 people and wide scale recruitment will start towards the end of 2017.

The Jaguar Land Rover investment confirms that Slovakia is a good place to do business and an investment of such magnitude will have a positive ripple effect not only for the region of Nitra, but also for the whole of Slovakia.

Jaguar Land Rover works closely with the communities near to its manufacturing plants around the world and, whilst construction is just starting in Slovakia, the company has already started to establish links with the local neighbourhoods in Nitra and the surrounding area.

Over the course of the next two years, Jaguar Land Rover will work with local organisations to create new education programmes to inspire the next generation of automotive engineers by bringing the world of work to life as well as increasing awareness of the range of careers available to young people.

In addition, it will introduce programmes to offer work experience, training and employability qualifications for people who are unemployed to prepare them for roles in the automotive industry.

During this time, the Company has invested heavily in its UK vehicle manufacturing facilities at Castle Bromwich, Halewood and Solihull to support the introduction of all-new vehicles such as the Jaguar XE, Jaguar F-PACE, Range Rover Evoque Convertible and Land Rover Discovery Sport. It has doubled its investment in its engine plant in the UK to almost £1 billion – the largest injection into a new British manufacturing plant in decades creating several hundred new jobs.

Jaguar Land Rover has plans to expand its advanced engineering and design centre at Whitley, Coventry and invest in the National Automotive Innovation Centre at the University of Warwick. Jaguar Land Rover’s sustained investment supports the delivery of the UK’s wider industrial strategy.

Jaguar Land Rover confirmed plans for its first overseas manufacturing plant in 2012 when it signed a joint venture agreement with Chery Automobile Company Ltd in China. Since then, it has started production of the Range Rover Evoque, Land Rover Discovery and the Jaguar XFL in China; opened its plant in Brazil; agreed a new contract manufacturing partnership with Magna Steyr in Austria and introduced three new vehicles to its local assembly facility in India. 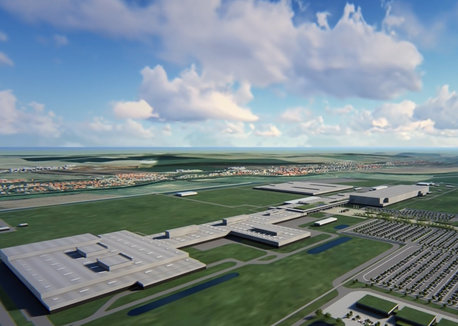