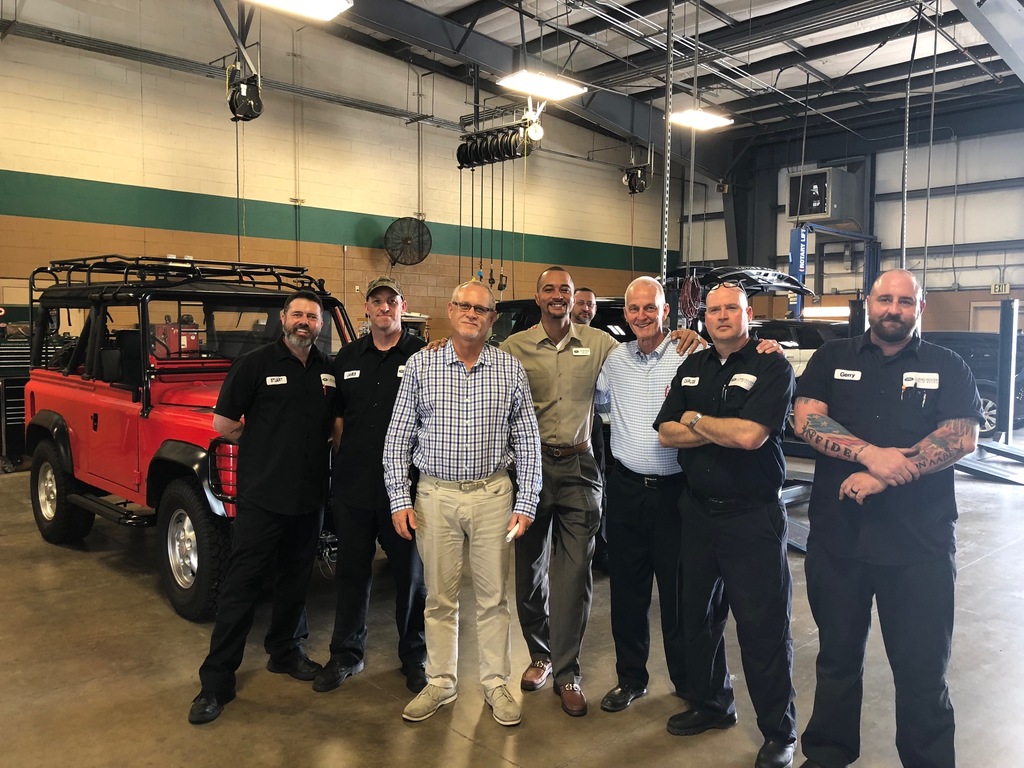 With 21 years under his belt at the Land Rover Palm Beach dealership, Mike Snyder has arguably mastered the art of supervising technicians. It’s no simple task, given the challenge of satisfying customer schedules, while understanding the multitude of systems that govern the Land Rover vehicle range. Fortunately he had gained strong experience with organization and leadership skills in his previous job, a two-decade career in the United States Marine Corps.

Discharged in late 1997 with the rank of Chief Warrant Officer 3, Snyder participated in dozens of deployments including Desert Storm and Operation Southern Watch in the Persian Gulf. He earned numerous commendations along the way, which include three Navy commendation medals, meritorious service medals, various combat ribbons and combat deployment medals. After his retirement from the Marine Corp., a longtime friend landed him an interview at Land Rover Palm Beach, and he started working at the dealership the next day.

Snyder is a strong advocate of the Jaguar Land Rover (JLR) Veteran Careers Program, a job placement initiative managed in collaboration with CALIBRE Systems, Inc. that has found employment for 242 veterans within the organization’s dealer network since the launch of the program in April 2016.  The availability of such candidates has been a great benefit to service departments like Snyder’s, which have been challenged by the increased volume of business resulting from the brand’s unprecedented sales over the last year.

As a former military man, himself, Snyder knows exactly what he’s getting with a workforce of veterans.  “They’re very upbeat, they’re proactive, they set a good example, their demeanor is good, they’re motivated, they come to work and they’re not late,” he says.  “They give everything they got, every day. They know they’re in it to learn, and they put forth a really good effort to do so. They also want to be regimented, which I like.  And when you’re an apprentice, being regimented is important - being able to follow step-by-step [procedures] without going ahead.  Even in their machinery, in their avionics, in their aviation…everything’s regimented.  And they’re good at that. The Veteran Careers Program is built like that too so it’s a natural fit for them, in my opinion.”

Land Rover Palm Beach has hired six veterans so far, five of whom collectively served in the U.S. Army, Navy and Air Force.  The sixth vet served in the British Army, making a particularly good fit with the English automotive manufacturer.

After being hired under the JLR Veteran Careers Program, veterans work for a trial 30-day period and then enter a three-week training program at a Jaguar Land Rover Training Academy to begin learning the ins and outs of vehicle service and maintenance. Most of the training costs are absorbed by the dealership. As Snyder explains, “We invest in these veterans, pay for their training and tools they need, and in return they make a commitment to us for a year.”

Snyder emphasizes that the program is working extremely well for Land Rover Palm Beach, and it’s clear that he has a brotherly affinity for his fellow vets.  “Every one of my guys has worked out really well; it’s amazing!”

With Memorial Day weekend around the corner, Snyder welcomes the opportunity to sing the program’s praises, and to bring greater attention and respect to military service and veterans’ issues.  He also hopes that non-military people keep the holiday in proper perspective, and take the time to thank veterans for their service when possible.

“The true meaning behind Memorial Day gets lost a bit with most people and it’s nice when somebody pats you on the back and says, ‘Hey, thanks for what you did.’  And I know my guys [the veterans working at Land Rover Palm Beach] really love and appreciate when people do that.”

“Giving veterans a job, giving guys an opportunity to continue their lives, being thankful that people recognize them; all of these things mean the world to these guys.”

Snyder also practices what he preaches.  How does he celebrate Memorial Day? “I go out there and slap a lot of backs.”

Veterans who are interested in seeking employment with Jaguar Land Rover retailers can learn more and apply at www.jlrtechs.com.