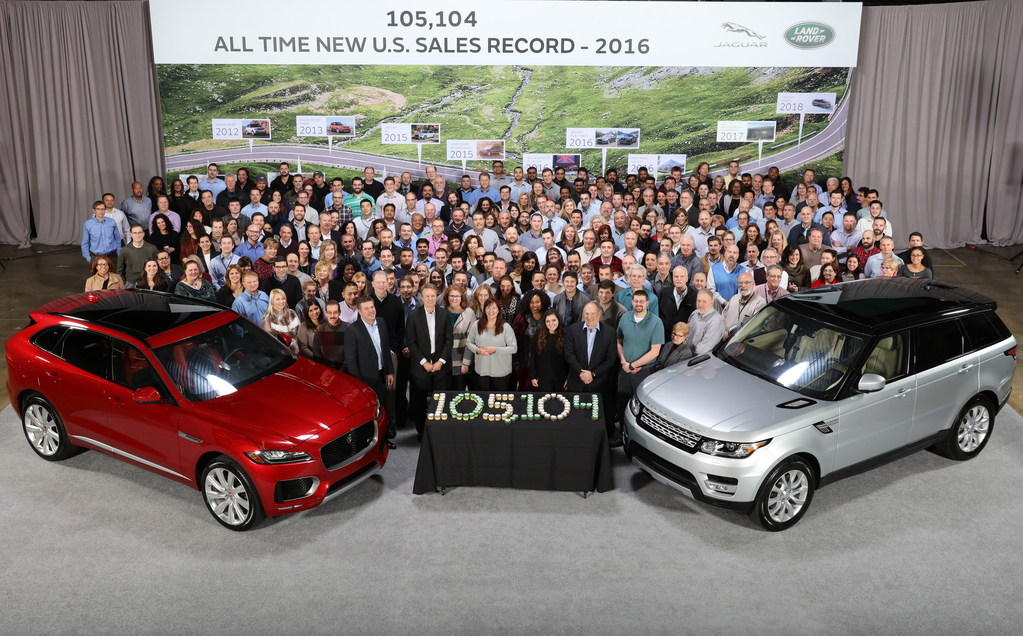 With combined sales up 24 percent, and Jaguar alone up 116 percent, 2016 proved to be a landmark year for Jaguar Land Rover. Chris Marchand, Executive Vice President, Operations, Jaguar Land Rover North America LLC says there is much more to come for the company.

Jaguar Land Rover saw tremendous sales momentum in 2016. What were the highlights?

Sales were up for both brands last year, 24 percent combined for the year, with total sales of over 105,000 units. That’s impressive in itself, but for me, it was Jaguar’s 116 percent growth, compared to 2015, that was the real highlight. When we kicked-off our ‘Next Generation of Jaguar’ initiative in 2015, we knew that our upcoming Jaguar XE compact luxury sedan and Jaguar F-PACE performance SUV would have strong customer appeal. Since going on sale just last summer, the F-PACE has quickly become Jaguar’s new volume leader with over 10,000 sales, followed by the XE with 6,665 sales. In December, they helped propel Jaguar sales to a remarkable 259 percent increase compared to December 2015. From a Certified Pre-Owned standpoint, the Jaguar brand also enjoyed its best calendar year of sales since 2008 with 6,527 units sold.

For the full year, U.S. Land Rover sales reached an all-time high of 73,861, up 5 percent over what was a very strong 2015. Range Rover and Range Rover Sport - the brand’s volume leader - continued to see strong demand, finishing the year with record sales in December. This year also saw a record year for Land Rover Certified Pre-Owned vehicles with 16,953 units sold.

How will you maintain this momentum in 2017?

F-PACE and XE are still new to the marketplace and demand continues to be strong. The F-PACE especially, is in one of the hottest segments of the market which continues to grow by the day. This year will also see key additions to the Jaguar powertrain line-up that will take us into new segments of the market. Of course, our big news for 2017 will be the launch of the all-new Land Rover Discovery this summer, with pricing from just under $50,000. Our retailers tell us that customer reaction is already extremely positive, especially to its contemporary design and optional configurable seven-seat layout. Beyond appealing to our current owners, New Discovery will give us a real opportunity to conquest new buyers in the ever burgeoning full-size 7 seat SUV segments.

How is this growth impacting the retailer network?

Without a doubt, 2016 was a turning point for the network. The average vehicle throughput went up by around 30 percent. That took retailers from selling an average of 350 units per store annually across both brands, to around 500. That’s a solid improvement. Our retailers are showing their optimism by committing to invest more than $1.5 billion to further enhance their facilities. They’re doing this through Jaguar Land Rover’s bold new ARCH initiative to create a common global retail design language. We have two stores in the network that have just completed the new design – one in Darien, CT and the other in Salt Lake City – with more to follow this year. By 2020, there are plans for over 70 percent of our retailers to have adopted this new corporate identity.

You’ll be moving into a new Jaguar Land Rover North American headquarters later this year. What benefits will the new complex give the company?

The new building will give us more space and allow us to expand in the coming years. One of the key benefits of the move is that it will see the addition of a new, state-of-the-art training facility that will be triple the size of our existing training center. The timing of its opening will coincide perfectly with the lead-up to the introduction of the ground-breaking Jaguar I-PACE electric crossover next year. Naturally, the new complex will be a showcase for our ARCH corporate identity. We’re not moving too far - the new building is down the road from our current headquarters in Mahwah, NJ.

How do you personally measure the growth of the two brands?

For those of us who were around back in 1991, shortly after I first began working at Land Rover in Maryland, you might recall that Land Rover sales totaled 3,309. In the same year, Jaguar sold 9,376 cars. That made for a total of 12,685 units. Fast forward to 2016 and in December alone, combined Jaguar Land Rover sales were virtually the same at 12,573. In one month we sold as many vehicles as we did in the whole of 1991. That’s progress, and a true measure of just how far we’ve come. Our customers have given us the ultimate vote of confidence to not only produce some of the best luxury vehicles on the market, but to also provide an ownership experience unlike any other. It’s our responsibility to take care of each and every one of our customers, to retain them and to brining in new customers. We all look forward to another successful year and continuing the stellar momentum for both brands.